The U.S. is ending a decades-long arms embargo on Vietnam, President Obama announced Monday in Hanoi.

At a press conference alongside Vietnamese President Tran Dai Quang, the president said lifting the embargo, which has been in place since 1975, will further normalize relations between the two countries.

“This change will ensure Vietnam has access to the equipment it needs to defend itself and removes a lingering vestige of the Cold War,” he said. “It also underscores the commitment of the United States to a fully normalized relationship with Vietnam including strong defense ties with Vietnam in the region for the long term.” 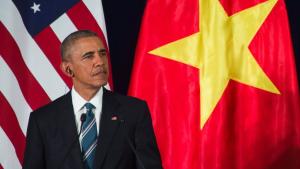 Complex US Politics of Trade Will Follow Obama to Asia

President Obama said the decision to lift the arms embargo was not made in response to China’s territorial assertions in the South China Sea.

“The decision to lift the ban was not based on China or any other considerations. It was based on our desire to complete what has been a lengthy process of moving towards normalization with Vietnam,” he said.

“My decision to lift the ban really was more reflective of the changing nature of the relationship,” he added.

The president said that while the arms embargo will be lifted, the sale of different types of arms will be dependent on the progress Vietnam makes on human rights.

“As with all of our defense partners, sales will need to still meet strict requirements, including those related to human rights,” he said. “This is an area where we still have differences.”